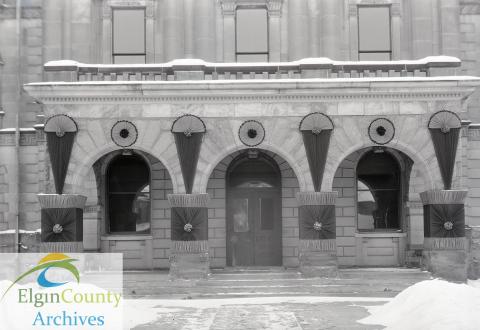 The Archives has designed and published a new virtual exhibit outlining the history of the Elgin County Courthouse in St. Thomas, a provincial historic site originally constructed 1852-1853 to satisfy conditions outlined in 14 & 15 Vic. C.5, 2 August 1851, which provisionally granted Elgin County’s petition to separate from Middlesex County, contingent on the erection of a Court House and jail. One of the earliest extant pre-Confederation courthouses in Ontario, it is currently the focus of a multi-million-dollar reconstruction and expansion project consolidating the Ontario Court of Justice and Superior Court of Justice in a single location. Using photographs and key documents from the Archives’ collections, the exhibit tells the story of the evolution of the Court House from the original 1848 deed by which St. Thomas citizen Benjamin Drake conveyed by gift to the Crown the property on which the Court House, Jail and Registry Office would eventually be erected, to the text of a commemorative scroll to be enclosed in a time capsule as part of re-opening ceremonies for the new Consolidated Courthouse, March 18, 2014. In addition to tracing the history of the Court House and treating its functional and symbolic purpose as exemplar and guarantor of justice, the exhibit examines the building’s social role in reflecting and affirming the emotions and values of its host community, as exemplified in the accompanying photograph showing the Court House draped in mourning on the occasion of the death of King George V, January 20, 1936.