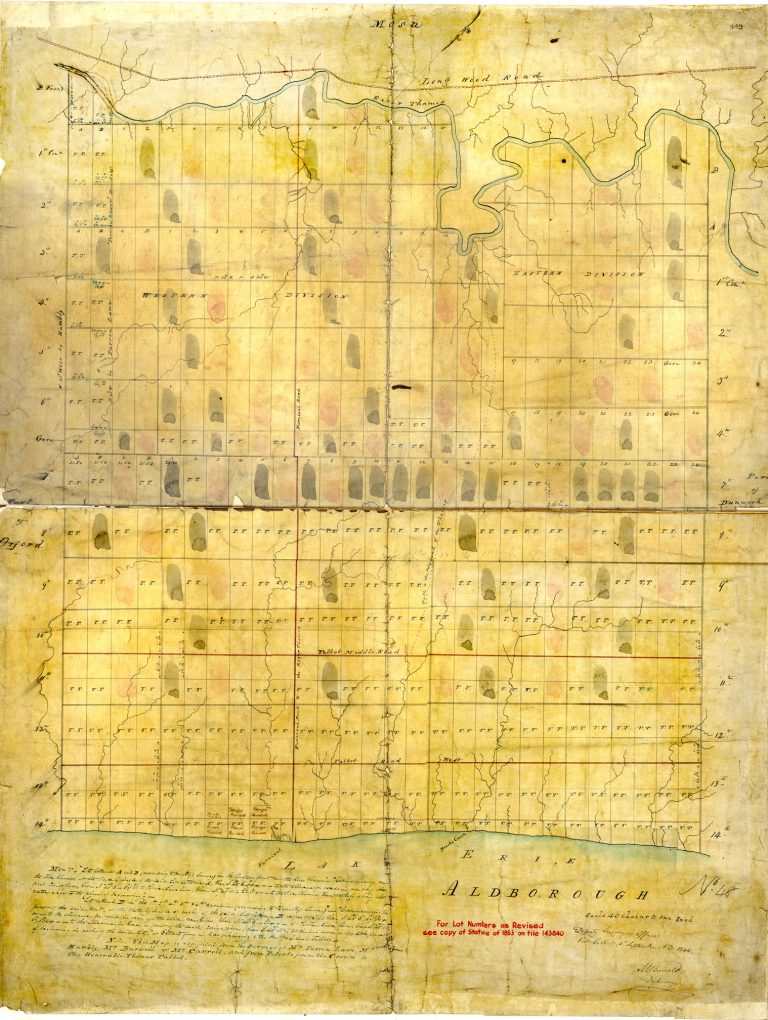 In collaboration with the Archives of Ontario, the Elgin County Archives has digitized the Talbot settlement and survey maps, comprised of the Archives of Ontario’s Thomas Talbot fonds and the Ministry of Natural Resources fonds. Both collections encompass the early years of Elgin County and surrounding townships, and show the province’s original landscape, geological features, and early settlements in detail, making this an invaluable genealogical and historical resource.

The Thomas Talbot fonds is comprised of 45 maps owned by Thomas Talbot used to grant land in the townships under his control. Maps contain many settler names and the dates of occupation, including revisions and annotations up until 1849. The amount of names, and the continued revision of the maps, shows a wealth of genealogical information for the early years of the various townships that would prove useful for family history.

The Ministry of Natural resources fonds consists of 33 survey maps done by the Surveyor General’s office from 1793 to 1844, and have been frequently revised and annotated since their original creation. Their purpose was to detail the landscape and the geological features as preparation for further settlement, and show the landscape as it was in the earliest days, including mills, creeks, very early settlements, and Native villages and settlements.

Due to their similarities in both geography, scope, and timeframe, these two collections have been published together as the Talbot Settlement and Survey Maps. The collections can be viewed through this link: https://www.elgincounty.ca/ElginCounty/CulturalServices/Archives/TalbotTract/index.html and also through our online database: https://inmagic.elgin.ca/ask/advanced-search.aspx.

Elgin County Archives Open by Appointment Only as of March 8th, 2021 – Notice

The Elgin County Archives will be closed from December 24th at noon, until at least January 25th, 2021

Elgin County Archives Open by Appointment Only as of August 10th, 2020 – Notice