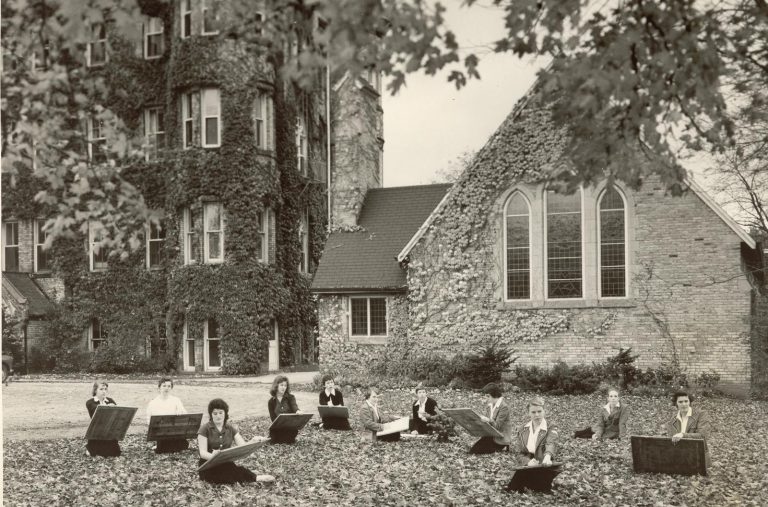 Curated by Dr. Susan Butlin, author of All the Girls Have Gone, Alma College, the Latter Years, it brings together a number of works by graduates and teachers at the College from 1881 to the 1960s. The college which opened in 1881 became known for its art department largely as a result of its founding director F. M. Bell-Smith who arrived with considerable teaching experience. It was likely Bell-Smith who convinced Principal Benjamin Austin to provide an large art studio at the top of the new wing built in 1887 and named after the College’s benefactor publisher Archibald McLachlin.
Bell-Smith was responsible for graduating some of the first professional Canadian women artists many of whom had come to the school from the surrounding area. One, Eva Brook Donly is well-known today because her home in Simcoe, Ontario is now a public museum. She lived and worked in New York and in Europe before returning to Canada. Several of her works are in the show which travels to the Eva Brook Donly Museum in January for a four-month run. Other accomplished local artists worked at colleges abroad or taught at home following graduation.
Following the appointment of Perry Dobson in 1919, the school continued to attract a high calibre of arts professionals as teachers and occasional lecturers. Some of the first art exhibits and recitals from Canadian artists to come to the area were held at Alma. An annual series of lectures and recitals had, by 1929, made the College “a fulcrum upon which (the arts) have hinged.” The exhibit reveals the important role the College played in the training of professional women artists and in bringing Canadian culture to our doorstep.
To view “The Fulcrum of the Arts: Canadian Culture and Alma College” digital publication in .PDF format click the button below or click here.
The Fulcrum of the Arts: Canadian Culture and Alma College

The Life and Legacy of Sir Arthur Currie

On The Trail of the Monarch Butterfly