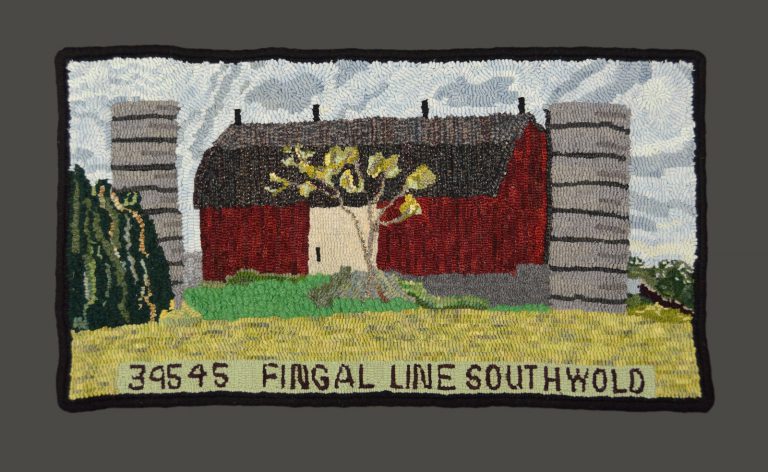 In 2011 The Huronia Branch of the Ontario Hooking Craft Guild put out a call to rug hookers across Canada for works celebrating the barn. The result was 68 entries of which 40 were selected for a travelling exhibition.

Each artist selected a barn building with special significance to them, many choose the barn on the farm where they live; others hooked barns fondly remembered from childhood or mythical barns, dreamed of but never built. Still others were selected simply because they made for a picturesque landscape. While many of the barns are located in the rural areas around Lake Simcoe, others hail from as far as BC, Saskatchewan and Newfoundland.

A highlight of the show is a Southwold barn scene hooked by the members of the Museum’s own rug hooking club, Memories in Wool, just for this show.

A second collection of textile art is being exhibited along with the rugs. Members of the Elgin Piecemakers Quilt Guild have each produced a quilted cushion reflecting on what the 150th anniversary of Confederation means to them.

The hooked rugs exhibit is organized and circulated by the Simcoe County Museum.

39545 Fingal Line Southwold, 2017 based on a photo by Jan Row. Hooked by members of the “Memories in Wool” Rug Hooking Group’ of Elgin County for the Elgin County Museum

The Illustrated Life of Jumbo