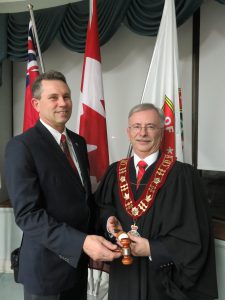 In 2017 Marr served on the Elgin St. Thomas Public Health Committee, The Greenlane Community Trust, and the Social/Entertainment Committee. Between 2010 and 2012 he was part of the committee to bring an Official Plan to Elgin County. Warden Marr has a background in farming and over 34 years’ experience in the tax business. He is a Port Stanley native and has been married to wife Sandy for 42 years.

In the event of a conflict, absence, or illness that prevents Independent Resolutions Inc. from fulfilling the role on a particular file, the firm of Aird Berlis, represented by John Mascarin, was identified and agreed to act as an alternate provider on an as needed basis.

A detailed report is included in the December 12 & 14, 2017 County Council Agenda Package.

In September Council directed staff to proceed with architectural services to refine the POA facility needs (one court room and POA/legal offices) and prepare construction drawings and cost estimates for council’s consideration.

At the December 14, 2017 meeting, The Ventin Group Ltd. presented preliminary drawings and costing for this facility. Council passed a resolution to consider the Provincial Offences Act (POA) Facilities project for deliberation as part of the 2018 Capital Budget process and authorized staff to sign a contract with The Ventin Group Ltd. as the prime architect for project design, engineering, tendering and contract administration services.

The year-end reports for several organizations, programs and departments were presented at the December 14, 2017 Council meeting:

Elgin County Economic Development provided Council with an update on the Elgincentives Community Improvement Plan. The update included funding allocated during 2017 as well as examples of interesting projects completed in each of Elgin’s seven municipalities.

The Elgin County Museum presented a report outlining its activities in 2017. This included exhibitions, outreach, programs, additions to the permanent collection, social media presence and the opening of the new Elgin County Heritage Centre in 2018.

These reports in their entirety can be found in the December 12 & 14, 2017 County Council Agenda Package.

One Staff Tests Positive for COVID-19 at Elgin Manor